by HF Mystery Writer | May 21, 2015 | Countries I Write About, Craft of Writing, Indie Author Blog 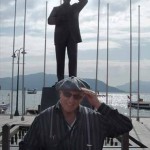 Mustafa Kemal Attaturk, the father of modern Turkey, made revolutionary changes in Turkish society. The first president of Turkey abolished the existing caliphate, separated the state from Sharia law, abolished the use of Arabic while establishing a Turkish language and modernized the country. Women were free to choose their mode of dress. He encouraged the adoption of western styles.

For me. Attaturk’s preoccupation with the hat is fascinating. He wore a Panama hat, among others. Fedoras, derbies and other western hats were, to him, symbolic of a civilized nation. He required civil servants to wear hats and suits. As a writer, and as a lover of hats, headgear is a visual representation of one’s presentation to the world. We know this from watching old-time western movies. The good guys wear white hats, the bad guys wear black. When we see the hat, we know they are cowboys.

When I visited a small town along the southern Turkish coast, I saw a statue commemorating Attaturk. He was wearing a newsboy-style cap. I was wearing a newsboy-style cap. Immediately, I felt an affinity for Attaturk. We were hat guys. We even preferred the same style. The description of a character’s clothing is important for the reader. The detail in appearance tells a story of its own.

Work – a tale of perfomance.

by HF Mystery Writer | May 19, 2015 | Countries I Write About, Craft of Writing, Indie Author Blog 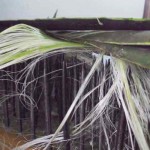 Work – and how performance tells a tale.

The job doesn’t matter. It’s how the character performs the work that tells a tale.

I love professional waiters. They make the dining experience worthwhile. Knowledge of food and drink is important. Knowledge of people is even more important. For me, excellence deserves respect. Mediocrity does not. We all have our opinions about how people behave. I think most of us would usually agree on issues of good and bad. When words describe the behavior, we can share the vision.

I had the pleasure of visiting Montecristi, Ecuador, the home of the Panama hat. The manufacturing process is low tech. Leaves of the agave plant are shredded to get the fibers for weaving the hats. The quality of the fibers determines the quality of the hat. The people who made the hat I bought were proud of their product. I think of the hat’s beauty every time I wear it. And, in the third volume in the Benny Golfarb series, when I relate the adventure in Ecuador, the hat and the native people in the mountains above Manta, will shape the writing.

by HF Mystery Writer | May 13, 2015 | Countries I Write About, Craft of Writing, Indie Author Blog 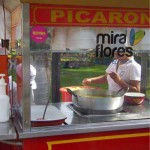 Food - what the locals are eating.

“Tell me what you eat, and I’ll tell you what you are.” Frenchman Brillat-Savarin believed that food had its own story to tell. I agree. Writing, travel and food come together in providing a snapshot of a culture. Eating what the locals eat is the first step in appreciating who they are.

Benny Goldfarb, Private “I” has descriptions of what characters are eating in Colombia. My colleagues often tease me about a chapter making them hungry. That is an unfortunate side effect. I believe that by sharing the same cuisine, I move toward greater cultural appreciation. Speaking the same language also has a similar result. There are concepts couched in speech that have cultural nuances.

What might a citizen of Lima feel on a weekend afternoon in Kennedy Park when enjoying freshly-made picarones, a doughnut-like treat? There’s one way to find out—get in the line at the kiosk, and wait your turn. You will know what generations of Peruvian parents and children have relished. 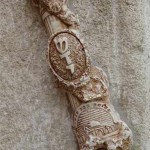 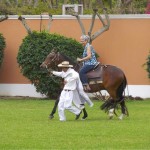 Experience – the effect of Cape Horn.

by HF Mystery Writer | May 6, 2015 | Countries I Write About, Craft of Writing, Indie Author Blog 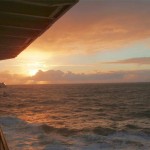 What’s it like to round the Horn? For me, the experience was extreme. In the space of two hours, there was rain, hail, high winds, snow and sunshine. How did this affect me as a writer? I understand why the Bounty’s crew mutinied. In the movie, Captain Bligh informs the crew that he is taking them back to England by way of Cape Horn. The crew protests, “No, not the Horn!” Shortly after, they seize the ship and turn back to Tahiti. After experiencing the Horn, I would have joined them. Who wouldn’t? Half the ships rounding the horn foundered on the rocks. Their descendants inhabit southern Chile.

Nordhoff and Hall, the authors of Mutiny on the Bounty, traveled to Tahiti. The story benefited from their experience. Their research included perusing Captain Bligh’s journals, the ship’s log and historical accounts. The rich detail in a work of fiction is a thing of beauty. 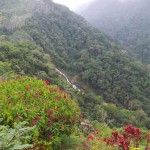